Here is a tip for beginners working with Worksets for the first time.

Let's say you have a project with worksets enabled and the whole model is on Workset 1 by default. If you right click on an element that is on Workset 1 and select the option that reads "Make Worksets Editable" you are making yourself the Owner of Workset 1. No one else is going to be able to edit ANY modeled elements that are on that workset. They can add elements to Workset 1 but they can't edit elements already placed.

If you go to Collaboration... Worksets... and you see yourself as the Owner of any workset you're probably locking everyone else out of that workset so make sure you click on the "Non Editable" button to relenquish the user-created Workset... or do a save to central and relenquish user-created worksets so other users can work on the model too. 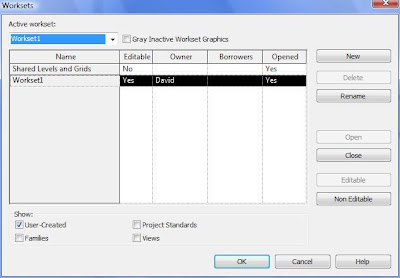 What you more likely want to do is borrow... or select the "Make Elements Editable" option instead so you are only borrowing a small part of the worksets rather than Owning the whole workset.
Just a heads up for you beginners out there.
Posted by David at 5:00 PM No comments:

David
I'm a Revit Beginner with an architectural office in Southern California. We design traditional, high-end residential work. I was introduced to Revit 4.5 in 2002 and am currently a member of AUGI.